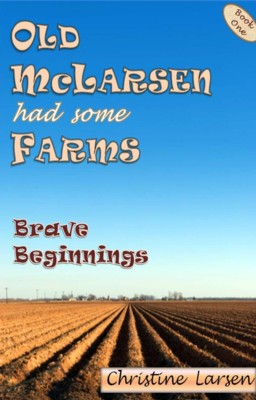 You can check the whole story here right now

(and a couple more experimental memoirs are here too)

OR read small synopses of the chapters right here –

One: Welcome… ?     I’m reminded of the little train engine who’s chant ‘I think I can, I think I can’ took him up and over the hill. No doubt about it. You had to be young and naïve and full of ‘wannabe’ dreams and schemes. Tackling a farming ‘apprenticeship’ as a young married couple was never going to be easy. Nothing a Building Supervisor and a Secretary couldn’t handle… right? As it turned out, all we experienced in the next 18 months or so was exactly the ‘stern stuff’ needed to build the inner strength and fortitude that has kept us farming ever since. Here’s a description of our new rural home.

Two: Kangaroo Rescue     Marsupial murder and mayhem. That’s how I viewed my first and only ‘roo-shooting trip. There are many ways to look at this vexing question of culling—or not. Personally, it was easy. I’m a carer, not a killer. Maybe this story can help you make your choice, too.

Three: Life is Mostly Froth and Bubble    We all know the one about ‘if you can’t take the heat in the kitchen… ‘—in this case it was a question of seeking relief from the heat in the bedroom. (Now, now, now… don’t jump to conclusions – I have yet another homily for this one)

ALL that is hot, doesn’t happen in bed’—hmmm…

Four: Roo-manship?    Most people raise kids—and we did, too. But at this early stage of our marriage, we raised kangaroos—and a number of needy four-leggeds, as well. So much work and worry—so many wondrous blessings.

Five:Bloody Hell or Heaven?    Some days there are many shades between pastel pink and blood red. Sometimes people can be fooled, just like the way that all that glistens is not necessarily gold. This is surely a story of what ‘ain’t necessarily so’.

Six: A Little Honey called Candy    Our golden girl filled a gap we really wanted to crowd with children. Here was another city slicker making a tree change, and loving every minute of her new-found freedom. Candy was the smallest Earth mother we ever met.

Seven: Ooroo means Goodbye    … in Australian—but not if Candy had any say in the matter. Her love sustained this tiny kangaroo through his darkest hours, and through their deepest explorations of the vast expanse of country surrounding their home.

Eight: A Bush Gymkhana    Most of us have seen the elegant equestrian events being televised from show rings around the world. The only resemblance they share with a Bush Gymkhana is that the horses and riders work as a skilful pair, competing for honour and glory.

Nine: A Kangaroo Dog?    There can be a surprising number of visitors on a farm. Other farmers, friends, hopeful salesmen of fodder, fuel and fertiliser—and machinery and insurance, too. Of these, only friends seem to linger longer—but Trixie, the Kangaroo Dog was the exception. Not only a rare and unusual canine, but also a single-hearted devotee, determined to be ‘our’ dog for the length of our stay.

Ten: Food for Thought    I called him ‘Old Faithful’, and I’ve never had a stove to equal the comfort his warmth and cooking prowess provided. A hot drink and the smells of something delicious cooking greeted all who visited us, and at day’s end, his romantic light shone softly on us as we propped our feet on the opened oven door.

Eleven: Click Go the Shearers – Initiation    The city never seemed further away than the day our boss announced the shearers would be starting in a week or so… and I would be cooking for them. Nothing new for the ‘ladies of the land’—but quite a challenge for a ‘new-chum-type’ cook. Read about the endless feeding (not frenzied, just constant ’round the clock’ meals and teas… and dishes, mountains of dishes!

Twelve: Click Go the Shearers – By Day and By Night, by Gosh!    Told you I was naive. I seriously thought it was a good idea to share my birthday night with the fellows, at the exhausted end of yet another day slaving over a hot woodstove. There’s ‘green’ as in callow, even dumb—and then there’s ‘green’ as in being environmentally protective. Believing they would get tired soon and want an early night, certainly belonged to the former shade of green above. They settled in for the time of their lives—and I had one of the most memorable of my birthdays.

Thirteen: Perils of the Paddocks    ‘One man went to mow—went to mow a meadow,’ and old song tells us. Somehow I don’t think that traditional lyricist, the famous ‘anon.’, had ever dreamed of our vast ‘meadows’ (or paddocks, as we call them in Australia). Difficult to imagine those perfect green fields bearing the smallest resemblance to the trials and tribulations faced by thousands of acres of Aussie drylands.

Fourteen: A Spiritually Significant Circumstance    Some people are moved by different spirits than most. Some people find their sprit inside a bottle (like Aladdin’s genie)—and others from a bottle (like the motley crew in this yarn). Then there are some spirits that do the actual finding—in most unlikely and unghostly fashions.

Fifteen: Wild Life up North – the Journey    Of course, there are goat farmers, too. It’s just that mainly you think of livestock farming as involving sheep and cattle, pigs and hens. Sometimes specific animal husbandry evolves in unusual ways. In this case, it all began with a collection of feral goats from the far north—from station country.

Sixteen: Even Wilder Life up North – the Ecstasy and the Agony    Many of Life’s experiences involve both pleasure and pain, and our trip was no exception. A heady mixture of high hopes and humour was brought smartly down to earth in a forceful and somewhat painful manner.

Seventeen: Going Home… the first Road Trip    When you fly over Australia’s Nullarbor Plain, you are in no doubt of its vastness and barren isolation. But it still takes only hours to cross between the two nearest capital cities. Driving it is another story. When two homesick young marrieds push themselves to the limits in a 39 hour driving marathon, the plot (as well as the bull-dust) truly thickens.

Eighteen: Going Home… more Road Trips    There are flying trips that are taken by air—and then there are road trips that are described as ‘flying’ trips. Some are more aptly called ‘flying by the seat of your pants’. Each of these ‘down to earth’ varieties is an apt description of one of our most memorable crossings of that long and lonesome road.

Epilogue: Going Home – Finally and Forever    The title tells the story. ‘Home’ to us would always and ever be our beloved South Australia. When the moment arrived to put down our roots, the rest of our great country faded into oblivion. Our rose-tinted glasses could see only one path ahead, and a singular destination.

Next?    Hopelessly infected by the farming ‘bug’, our search began. We weren’t exactly sure of what we did want, but we were definite about not wanting sheep or cropping. We had deeply appreciated the experience gained, but for better or worse, our hearts unerringly led us to dairy-farming.

and here are the early chapter synopses –

One: Dairy Farmers? Really?    Our plan for at least three years of dairy share-farming lasted just a third of that time. As my dear old Mum would say—’Bite off more than you can chew… and then chew like hell’. We surely did some furious ‘chewing’ for the rest of that decade—on our first own farm.

Two: The Milky Bar Kids – In the Beginning    From first milking to last, the dramas unfolded… but where, oh where, did we find the courage to continue after our deeply traumatic initiation? I’m guessing it was our need and naivety pumping up our display of ‘Dutch courage’.

Three: Trash… or Treasure?    One lonely spanner was not really enough to begin a successful dairy-farming enterprise—and so our first years saw us haunting farm clearing sales for the junk boxes most self-respecting farmers rejected. We placed these into much grander classification of ‘Loose Tool Replacements’—although we rarely shared the fact they were actually replacing nothing at all.

Four: The Mean Machine    Going ‘green’ (or truthfully, more often ‘brown’ on a dairy farm), involves getting comfy with some large and different machinery. Such was our ‘Hurricane’ forage harvester and its towering trailing bin, rearing back behind the tractor like the famous dinosaur, Tyrannosaurus Rex. Some transition that one—from Secretary to farmer. The experiences, like the pastures, just kept on growing.

Five: City Visitors – a Word of Advice    Another apt title. It’s not only that it’s good practice for farmers (especially the dairying kind) to have a strong sense of humour… it’s essential. If you have actually lived this rarified lifestyle, or even read about it, I doubt you will disagree. If you’re still in doubt, just ask any farmer his opinion.

Six: To All the ‘Girls’ We’ve Loved Before    Whether they were one of our ‘heartbreak kids’, or belonged to the ‘happiness harem’, each of our dairy herd had her own personality. Most held a special place in our hearts, with just a few causing us pain in the neck—and many other places. For various reasons, all brought a tear of some sort to our eyes… sooner or later.

Seven: A Funny Thing Happened on the way to Christmas    Taking a day off seemed simple—whilst it was in the mental blueprint stage. “It’ll all be right on the day” were brave and ambitious words that didn’t actually survive the reality test. This was surely our most memorable festive ‘almost’ celebration.

Eight: The Three of Us    Whether picking mushrooms or daisies, herding cows or cleaning down the dairy yard, it’s not an easy job, being a mother. Before you know it, you can find yourself in a lot of hot water. Here’s a little ditty for my Mum, who could have told you a great deal about these matters.

Nine: Beware of Bonny Bouncing ‘babies’    Giving birth is one thing, and being a midwife quite another. But imagine the mother, the midwife and a complicated and difficult birth all happening in a paddock… but wait, don’t stop imagining. All too soon the saying—’You can lead a horse to water, but you can’t make it drink’—becomes a reality. Except now it’s time for some cautionary tales about leading calves to milk—and other places.

Ten – The Gypsy in our Souls    Gypsies throughout history have been blamed for many things. This Gypsy stole our hearts without a backward glance, and has held a large part of them both captive ever since. Some humans are lucky enough to get quantity as well as quality in their ‘furry’ relationships—our family received 17 years of her total devotion. How special was that?

– and in various stages –

11: Whether or Not it is Clear to You

2 thoughts on “About… the Chapters”