OLD McLARSEN HAD SOME FARMS

… and this is the last of them, our retirement farm in the SE of South Australia.

And the title above is the name of the series of my farming memoirs.

The first book in this series is –

…  typical and truthful tales from our ‘apprenticeship’ on a wheat/sheep farm in Western Australia,

and in Part Two of the book,

authentic anecdotes from a decade on our own dairy farm.

Did someone ask for a sneak preview?

OK, here are some excerpts – just a taste of what’s to come. 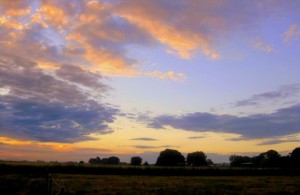 Like a spider with its intricate web, I spin the tales of yesterdays – the 1900’s or 20th century – as some of us lived them in Country Australia. When you have physically ‘survived’ this way of life and these times, I hold that you have total right to write… about Life as it was lived in your own corner of the World, with totally sentimental sentiments. My personal beginning – and that of my husband Kanute, started in other places and times – and present other storylines altogether. This one is our farming story, from its beginnings in the most Western State of Australia, where we first learned the ropes – and the barbed wire, too.

These are my stories of a city couple gone ‘green’ – tales that are most often unashamedly embarrassing, whilst always triumphantly truthful and sweetly singing the sagas of yesteryear. I believe they have value today and every day in the future. I write with the ‘plan’ to present, entertain and amaze, as I take my reader back to the past, other times and other places.

Come, join me on my path – filled with an innocence, inexplicably combined with a degree of self-belief that made all things possible. The faintest stirring of human curiosity will guide you on the journey, and entertain you with many engaging encounters along the ‘garden path’ – especially the rural variety. […] 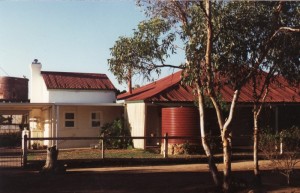 Sometimes you come down to Earth with a jolting thud. The day we side-stepped the rat-race, the smog, and the mainstream of Life as we had lived it so far, we landed with a decided wallop. No more weekends with two whole days off, and no more public holidays. None of the phenomenon known variously as RDO’s (rostered days off) or flex-off days—in fact, to be painfully honest, we go back so far, these perks hadn’t yet been born. Nor holiday loading either. This is where a percentage of your wage is paid to you at holiday time, to compensate you for expenses during annual leave. There is some good reason for this, apparently.

A more chicken-hearted, less pig-headed ex-secretary would have dragged her husband bodily back to the city. Such questionable comforts as the never-ending rush hour traffic jams, sardine-can crowds, and the almost constant frustrated beeps of car horns, were the music we had lived with. Passengers would be liable to hear choice words mumbled under the breath—even out loud under great duress—if the driver was alone. No road rage in those days. This expression had not yet been invented… nor was it needed.  […]

Baby Snoopy… how did you survive?

Snoopy was simply one more of the hapless and helpless victims to experience the same rude interruption to what should have been his natural life. Safe and warm in his mother’s pouch one minute; abruptly swung and jolted as she tried to bound to refuge and freedom; a sudden hard fall that had to hurt, despite his ample cushioning. Harsh hands searched for him in what had been his sanctuary. But then he was found, and pulled rudely from the familiar warmth into the horror of blinding light, and gruff and alien sounds. The smell of fear thickened the swirling dust all around, as his captor triumphantly held him high for the others to see.

“I’ll just put this little bugger out of his misery,” he said, taking a firm grasp of the baby’s tail as he spoke, moving towards a nearby tree. Horror filled my heart. I could see what he planned. […]

Life is Mostly Froth and Bubble

It was another stifling day in the West Australian wheat belt, in a heat wave that hadn’t seen an evening temperature below 90°F (32°C) for more than two weeks. We were not yet adjusted to the sun’s relentless demands on our energies and enthusiasm. Even our daily after-lunch siesta had been proving inadequate to replace our ‘get up and go’ that seemed to have ‘gotten up and gone’—without us. Surely an early night would be the solution? Sounded good, but we soon found sleep impossible. The sun may have set but its memory lingered—with a vengeance.

Brainstorm number one that night was to thoroughly wet two thirsty bath towels, wring them out and lie on top of them. […]

I’m not afraid of the Big Bad Bush

I could hardly believe it was happening. We were really moving to the country—beginning the journey to our vision of freedom. And as if that wasn’t enough to delight and excite me, I could also have a dog again.

“Remember how impatient I was?” I ask Kanute, as I tell him I’m writing about Candy.

Kanute laughs. “Who could possibly forget?”

“What a honey of a dog.” I smile too, as I picture that golden puppy as I first saw her, in a pet shop cage. “Take me, take me,” she clearly said, with her soft brown eyes. […]

The excitement ran high in our corner of the Wild West of Australia, when we heard about a bush gymkhana planned to be held in a town some hours away. Little of this trip would be bitumen—instead we would travel many dusty miles on roads that were barely more than wide tracks. Once upon a time, these ‘roads’ had known a grader blade—sometime in the distant past. The town itself had a proud history, being the site of the first gold strike in the area. The town was named after the lucky prospector, who was the first to register a lease for gold mining in Western Australia. In its heyday, Payne’s Find supported some 500 residents. By the 1960’s, mining was in a decline and the population dwindled accordingly. This gymkhana was one local person’s brainstorm to bring people and money back into the area. […]

The need to light a fire for a wood stove every morning was a novelty for at least several of our earliest days, soon transforming into an inevitable, mostly deadly monotonous daily chore. Without that wood stove burning for at least an hour, not enough hot washing-up water would be produced—in a huge kettle, on top of the stove. Apart from the lonely power point by the sink cupboard, there was an even lonelier cold tap over the sink. With the bathroom situated at the other side of the house, several hours of briskly burning fire were required before a shower or bath could even be contemplated. […]

My tapestry – ‘Shearing the Rams’ by Tom Roberts

In May 1971 a much-loved Australian actor, ‘Chips’ Rafferty, died. In the 1960 film The Sundowners, he was Quinlan, boss of hiring and organising shearing teams at a Stock and Station Agency. Quinlan was in charge of combining individual shearers and other shearing shed workers to make these teams that would work the shearing circuit of the larger graziers’ properties for the current season.

The film was set in the 1920’s, and the star (Robert Mitchum), was a ‘gun’ (champion) shearer who could do “better than 200 a day… his best is 248” (our shearers boasted 140 merinos each a day in the 1970’s! The rugged Robert was definitely a gun shearer.) In the film—given this amazing level of prowess—Quinlan desperately wanted him, but was reluctant to accept the “all or nothing” deal of the wife, son, and friend, along with the shearer himself.

“That queers it. I never hire a woman cook,” Quinlan says. “I only hire blokes!” and further suggests the food would probably not be up to scratch. […]

Perils of the Paddocks

“You’d be happy for that rain last Tuesday,” one of us would say.

Sam would frown, purse his lips and shake his head. “Too early to do any good, that lot. Dried up as soon as the sun came out again… ground’s like a sponge this time of the year.” This time of year meant that the time for sowing crops was near—immediately following an exact amount of rain to soften the Summer-hardened soil without turning it into a boggy, sodden mess. Before we began our farming apprenticeship, Sam would often come to the city for brief getaways. He seemed to always be whingeing about the weather—like most farmers. Always it was too much rain, or not enough, or too soon or too late—always too something, it seemed. […]

Wild Life up North – The Journey

The changing face of the countryside was fascinating to us. Kanute and I had already adjusted our city eyes, and become accustomed to the view of acres and acres of crops, and paddocks filled with grazing sheep. Now, as we travelled further north, the soft grey-green gum trees were subtly changing from the familiar varieties in our area. Here they were shorter and sparser, huddled together in groups, conserving whatever moisture their combined shade could produce. As we left the cereal country behind, the natural grass growth changed as well—tussocks now, with increasingly wider, sandier spaces between. Trees and grassy clumps alike clung desperately together for sustenance, as if the warmth of their fellowship held the key to their survival. Abruptly my philosophical reveries were interrupted by Sam’s urgent words.

“Kangas! Look! Over there by that fallen tree.” Sam was pointing through the grimy front window of the truck, as we trundled steadily along. “See them? Far over there to the left.” It took a few confused moments to focus, and actually catch sight of them. When one of them lifted his head, turning suddenly as he caught the alien rattling sound of our vehicle, we could suddenly see them—and the panic that spread swiftly through their numbers. Our approach had been from upwind, and we had caught the mob off guard. […]

And just when you think it’s over… it’s not! There are other stories with intriguing titles like –

Roo-manship
A Kangaroo Dog?
Click Go the Shearers – by Day and by Night, by gosh!
A Spiritually Significant Circumstance
Even Wilder Life up North – the Ecstasy and the Agony,
and three chapters about our several trips home to our beloved South Australia –
our roadtrips across the vast Nullarbor Desert.

Tempted to read it all yet? I certainly hope so.

Read a couple of the first chapters in their entirety at these sales outlets and you just may be tempted to buy the whole book.

I would love to hear your opinions – please consider leaving me a review at any of these places.

And please also feel free to comment on how you feel Book Two is developing and any likes/dislikes/advice/suggestions? Always open to ideas.